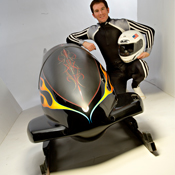 Over the years I have been asked just about every question you can think of when it comes to bobsled. From "What do they make the ice out of?" to "What if you put flour on the sled's body to help with aerodynamics?" (true story) so I wanted to compile a brief summary of some key terms and components of my beloved sport.

These are very basic definitions and descriptions designed for the general public, so my colleagues in the sport may find this page redundant. But for those of you who want to learn more about the world's BEST winter sport, read on!

Brakeman: Athlete who sits in the back of the sled in Two-Man and Four-Man bobsled.
Driver: see Pilot
Pilot: The athlete who drives the sled by use of steering ropes and the steering system which controls the front two Runners. The Pilot sits in front in both two-man and four-man bobsled.
Pushers: In the four-man sled, two additional athletes help push the sled and then sit in the sled between the pilot and brakeman. 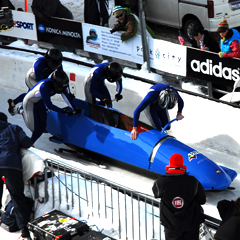 Braking Stretch: The section of the track just beyond the Finish Line where teams use their brakes to decelerate. It’s the part on TV where all the ice is spraying out to the side.
Buzzer: An audible noise that lets the team know the track is clear for them.
Control Tower: Just like at an airport, the track’s Control Tower monitors track clearance, the timing system, the video system and more. They’re the bosses.
Cornering: When a bobsled team heads through one of the track’s curves.
Course: See Track
Finish Area: The area at the bottom of a track where teams remove their bobsleds from the track and place the sled into its Scabbards.
Finish Clock: The timing scoreboard that sits near the finish area.
Kreisel: A turn on a bobsled track that curves back on itself and is between 270 and 320 degrees around the circumference.
Labyrinth: A portion of the track that consists of a three-turn combination.
Line: The best or most efficient route around a track. A "high line" takes a sled closer to the top of a turn while a "low line" takes a sled closer to the bottom, or belly, of a turn.
Lip: A reinforced safety barrier that sits on the top edge of turns and prevents sled from flying off the track. Hit these and you’ll bounce off back down the turn.
Omega: a large turn that looks like the Greek letter Omega or a ‘W’.
Push Block: A wooden block frozen into the ice on the Start Ramp that the team uses to push off of during the Push Start.
Start Area: The top area of the track where teams prepare and queue their sleds.
Start Clock: a countdown clock off to the left of the Start Ramp that contains a green light and a buzzer to let the athletes know when the track is cleared for their run. Bobsled teams have 60 seconds from this point to break the first timing point.
Start Ramp: The Start Ramp on a track is the initial decline that bobsled teams push down and load into their sleds for their Run down the course.
Sturz: (also 10-81) German word for crash.
Track Crew: The talented professionals who keep the track running smoothly. They clean and shape the ice in the curves and monitor the overall conditions of the course.

Disqualification: (also DQ’d) When an athlete or team is found to have broken one of the rules he, she or they are Disqualified from the race.
Heat: A heat in bobsled consists of one rotation of the race order.
Loading: The portion of the Push Start where the athletes load into their seats in the sled.
Officials: A team of dedicated professionals that help make sure everyone is adhering to the rules of the game from the start of the competition to the end.
Push Start: The portion of a run where the team pushes the bobsled down the Start Ramp and loads in. This is all about speed and power and the race can be won or lost with a Push Start.
Run: (also decent) A run consists of a full trip down the course for a team.
Timing Points: The Timing Points on a track are locations where sensors have been embedded into the course’s Short Walls so as to measure a team’s speed and time spent on their current Run. 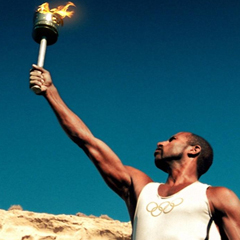