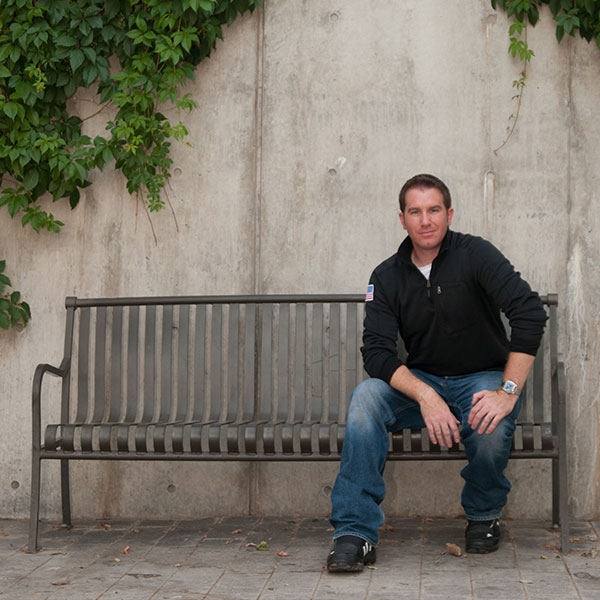 Many of us have been taught that making a mistake or not achieving our goal is a baaaad thing. I'll never forget my little league baseball coach screaming at me because I was tagged out on 2nd base. I was 8 years old, people! As teenagers we begin to live with the overwhelming pressure that even one wrong answer on a test can "ruin your college career!" As adults we work at our jobs under the silent-but-deadly (a flatulence reference, really?) fear that if we make a big mistake in our reporting or with a customer or on a project then that's it; the pink slip will be waiting in HR.

Does this line of thinking work? You tell me. Think back to a social setting or structured organization or other expecting-force that was exerted on your life where mistakes were harshly and negatively dealt with. What did you feel? Did it help? Was it motivational? Did it motivate you to excel?

Don't get me wrong; expectations and guidelines and rules are crucial for forward progress and organizational stability since they act as instructional pathways towards success. Just look at winning sports teams or ever-growing companies and even a loving home. A free-ride, do-whatever-I-want existence carries tremendous detrimental consequences for anyone living it. And yes, there absolutely should be ramifications for someone who willingly chooses to disregard, disobey or otherwise disassociate from the rules and governing principles of a company, school, team, city, nation or even, yes, a church or club. Restitution is a beautiful thing. 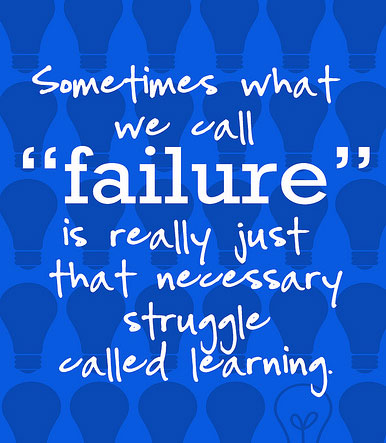 But what I'm suggesting is a fundamental shift in the way we look at failures and shortcomings. What I want to propose is that we begin to look at "falling short" as a way to fall forward. Like a baby who is trying to walk, more often than not our mistakes are made simply because we are trying to do our best and that is successful in my book. And much like a parent who encourages their child when the training wheels come off and they fall over, we need to brush off the dust when we fall and get back to trying again. That is pure gold and a mental attitude that turns mistakes into learning experiences and emotional slingshots that propel us forward instead of holding us back.

At what point in our society's history did we stop applauding the honest effort or the use of every choice, even the worst ones, as learning opportunities? When did we begin to believe that someone who truly gives it their all is undeserving of respect, regardless of their final placement in the race? When did we start looking at an artist's popularity more than their art? When did "fighting the good fight" become so passe?

Its a hard thought, isn't it? Your mental habits are resisting it, too. We are programmed to celebrate the champions, the winners, those who obtain the finish line, whatever that finish line may be. And we should; we should applaud someone who reaches their goal, the student who graduates or the entrepreneur whose business is growing or the couple who welcome a new child into their world. We should throw parties and send cards and post photos on Facebook.

But here's another question: does someone who "deserves" such a party have more worth than someone who has yet to earn such a celebration? No, because their immutable worth and value cannot be altered, positively or negatively.

I love that word, "immutable", and not just because it is fun to say. By its very definition "immutable" means unchangeable, sacrosanct, enduring and unalterable. Basically it means that something is eternal and untouchable. Does your immutable value change if you win the game or if you lose it? No. Does your immutable value lessen if you make a mistake at work or even lose your job? No. Does it change if you are single, divorced or married? No. Does it fluctuate if you are a sinner or a saint? No, and if you think it does then you need to study the difference between worth and worthiness. 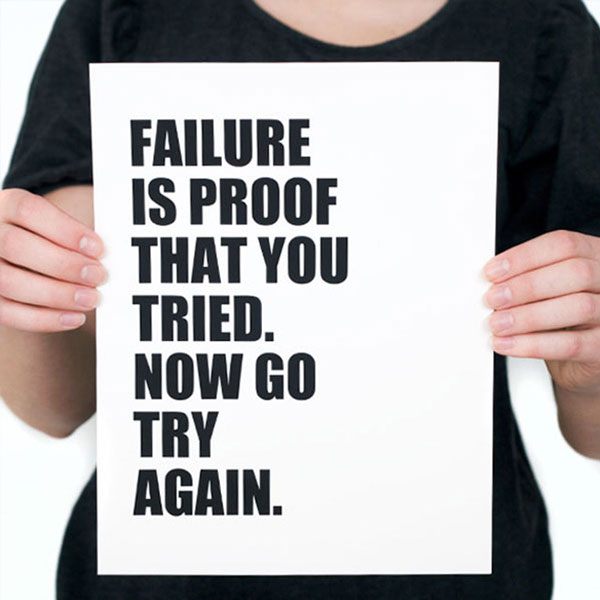 My point is that even when we fall flat on our face, even when we do the dumbest of dumb things possible, even when we make the biggest fool of ourselves that is humanly possible, our immutable, eternal and perpetual value does not change.

So if our core value and worth as a human being (and a child of God, mind you) doesn't change even if we "fail" through poor actions or choices, what are we so afraid of? I mean, we know that we all make mistakes and "fail" and "lose". We get angry with our spouses, we mess up a project at work, we dodge left when we should have gone right, we do something we know we shouldn't and so forth. We all fall short on a daily basis, every single one of us. And even though we all know that, we fear failure. Why? Because of all the human-based extras that potentially come with it: embarrassment, public censorship and correction, pain, the loss of income or a relationship or some social status we've gained.

But if the loss of the big game or that job or your income or some social status you had or even your ex-relationship cannot change your value... what are you so afraid of? And if there is nothing to fear, then maybe "failures" and "mistakes" are powerless over us. And if they are powerless over them, is it possible that we can have complete control over them?

Yes. And with that thought in mind, now you can see just how powerful the popular question is: "What would you do if you knew you could not fail?" Because when you begin to look at mistakes, errors and even shortcomings as learning experiences to be cherished and even grateful for, then there is no longer such a thing as "failure." All that remains is brave effort to move forward towards your goals in life, head held high, enjoying all the sunshine (and the storms) as you deeply treasure the love of those around you along the way.

Thomas Edison, the famous American inventor, understood this principle. When Walter S. Mallory, an associate of Edison's, found the inventor huddled over a twelve foot long bench filled with unsuccessful attempts to create a nickel-iron battery, Mallory said, "Isn't it a shame that with the tremendous amount of work you have done you haven't been able to get any results?" Edison dropped his work and like a flash responded, "Results! Why, man, I have gotten a lot of results! I know several thousand things that won't work!" To the common man those thousands of things that didn't work were "failures", but to Thomas Edison they were simply lessons that taught him more about how to reach his goal.

So, what is failure? Failure is what you decide it to be: a fear or a friend. Do our actions define us? Yes, but so do our attitudes and if our attitude is set to constantly learn and grow and overcome any setback, mistake or poor choice, we are growing in our personal development in such a way that nothing will be able to hold us back. So fail, my friends. Fail Forward towards success. 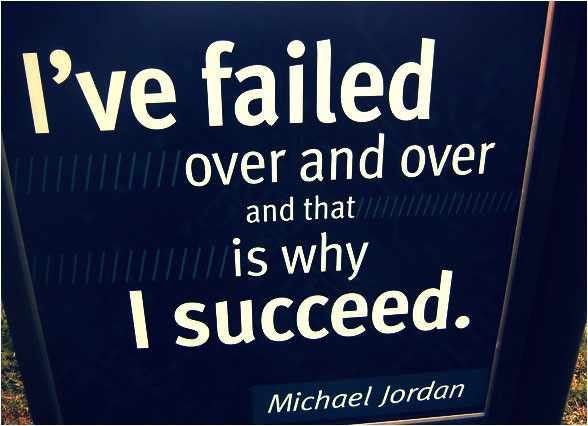 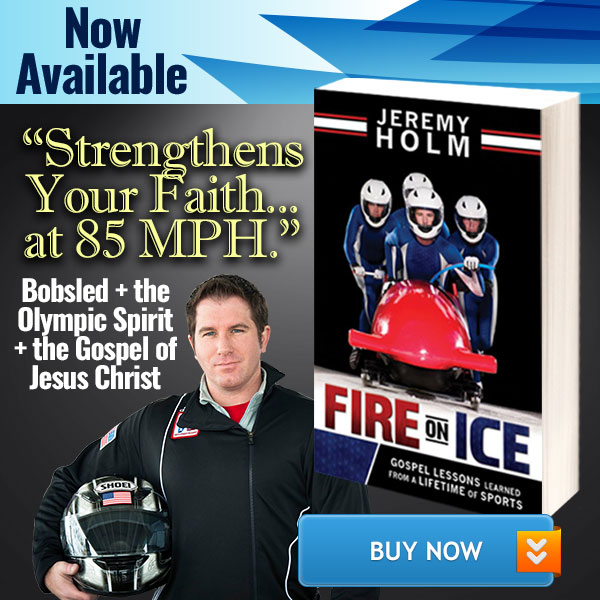 More in this category: « What Bobsled Taught Me About Adversity To the Class of 2015... » 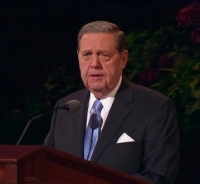